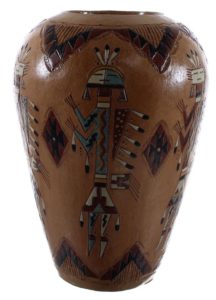 Among the art of creating jewelry from gems and precious metals, Native Americans have always displayed superb skills with other art forms, such as pottery and sculpting. Shaping pottery into a usable vessel goes back thousands of years and Native Americans have perfected the art of making ornate pieces of pottery that are simply stunning to behold.

At one point in time, American Indians only used pottery and other materials for ceremony or use the pottery pieces to carry water to and from the rivers and streams. It wasn’t until quite recently, around the 18th century, when settlers and explorers became more prevalent did pottery take on a new form in Native American society.

Native American artists began to decorate their pottery to make them more desirable to traders for other common goods. The designs were heavily influenced by their beliefs and as such have been decorated with symbols and patterns of Native American culture. While some may be simple in nature, others are more complex and highly detailed, with full paintings on the surface or simple images/patterns etched along the sides.

One of the most common images featured on Native American pottery are Kachina figures. These deities are regarded highly across many tribes of the Southwest region and their playful or stern nature is the perfect accent for any environment.

Another common element are simple patterns. These Native American patterns are a throw-back to the days of old where warriors once proudly rode across the Southwest, adorning these patterns on their clothing.

The shape of pottery is also important. The two-spouted wedding vase is a ceremonial piece that is used in wedding ceremonies, the spouts atop the piece represent the two people and the vase that joins them together represents the larger family that will be joined as one.

Native American pottery has a rich cultural background and the talented artists that carry on this tradition produce stunning pieces to this day.