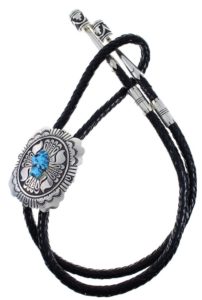 Bolo ties are an art form that has existed in fashion for decades and continues to gain popularity in American culture, especially in the Southwest region of the country. Everyone loves the classic cowboy attire, however, not too many know the history of the piece and how bolo ties came to be so popular in the American Southwest. Going as far as becoming the official neckwear of Arizona since 1971, this piece actually has a rich history in Native American culture a few decades earlier than that.

The Native American bolo tie was originally more of a metal bandana worn about the head; the style in which most people are familiar with became popularized prominently in Arizona as early as the 1940s. Since then, the bolo tie has been worn by celebrities and top-profile businessmen alike.

It’s impossible to say when the bolo was invented and by whom, but Native Americans were wearing the slide ties as early as the 1920s. In fact, although many regard the bolo tie as a simple way to make trade, the New York Times cited a source stating that the bolo tie was not a significant source of business in the Native community, but rather a fashion trend worn primarily by members of the tribe itself.

There are many different approaches to the bolo tie but the most common is a sterling silver setting with a dominate turquoise stone. The cords are traditionally made of black leather and the ends to the cords are typically sterling silver as well. However, there are a few other popular designs as well. Some bolo ties might feature a Native American symbol instead of the stone or no stone at all, just an intricate silver overlay design.

The bolo tie has continued to gain popularity in the 21st century and has seen a significant resurgence in 2016.