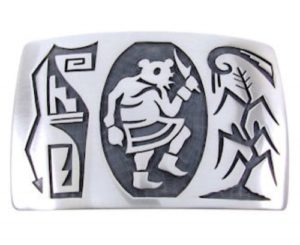 When people think of art, belt buckles don’t immediately come to mind. However, for Native American artists this simple fashion facet is a way for them to create stunning works of art and combine their cultural knowledge into one cohesive piece. Their work is even considered to be top-tier in the art community, depending on the skill of the artist and what they do with the piece. But, how do their pieces differ from regular belt buckles and what can people expect to see in their work?

As with all jewelry, the various tribes have their own way of doing things and add their own unique flair, style, and set of beliefs into the piece. However, here are a few things that are common in all modern Native American belt buckles.

In most Native American belt buckles, they will use sterling silver and quite a bit of it. Their pieces are larger than most and have some weight to them.

From there, most tribes will feature a traditional Native American symbol or pattern. Depending on the artist that made the piece and the tribe they belong to, the symbol will hold a different meaning. This is a good way to tell what tribe the artist belongs to as well if you don’t know. Some tribes will rarely use a certain symbol, while others may use it frequently.

For example, Hopi artists will tend to lean towards Kachina figures imprinted into their work, while the Navajo will stick to more traditional symbols, like the bear paw. The bear paw/claw will typically mean protection and embody a strong sense of leadership, harkening back to the days of hunting. The act of hunting a bear takes great knowledge to track and hunt, which requires that leadership aspect.

You will also notice key differences in the work of certain tribes, such as the Navajo’s use of gems with their Native American belt buckles and the Hopi’s use of the overlay technique in their silver.

The skill and art work that go into Native American belt buckles transcends the object itself and becomes wearable pieces of art, especially when made by talented and practiced hands. Their symbolism reflects a deep understanding of Native American culture as well.