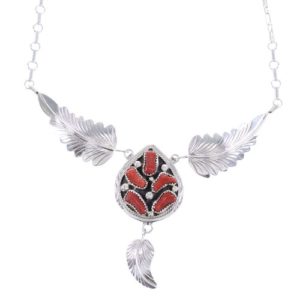 As with many other cultures, the history of Native American Indian Jewelry is decorated with culture, heritage, and belief systems that reflect the values of the Native American peoples as a whole. That being said, the tribes have their own values and viewpoints that make their jewelry and art unique from tribe to tribe. Some tribes believe certain gems to be sacred and use them in their jewelry, while other practice making only silver, with techniques to make the piece truly special. It is in these beliefs that tribes distinguish their jewelry in unique and stunning ways.

Prior to the Spanish exploring the country and trading with Native Americans, they primarily made their jewelry from natural materials, only learning to work metals through techniques taught to them by the Spanish by 1850.

Around the 1860s, the tribes began to stick to one area and no longer abided by nomadic principles. This made their jewelry more regional, reflecting the materials and landscapes of their designated lands instead of comprising material from their travels. Their skill with silver gave them comfort enough to create more of an economic system, involving precious metal coins for trade, as well as trading with settlers in surrounding areas.

By the 1880s, the various tribes of the Southwest took what they learned from the Spanish and had created a style all their own. The Navajo, for example, took their love of precious gems like turquoise and combined that with silver to create their jewelry. The Hopi, on the other hand, took what they learned and continued to perfect the art of silverwork, making pieces mostly comprised of plain silver.

At first, their silver necklaces, bracelets, rings, etc. were made solely for the use of trade. However, around the mid-20th century, the general public started to appreciate the artistic skill that went into Native American jewelry and the market for their pieces quickly took on new life.

Today, tribes from around the country have continued to create their art in a traditional sense and even evolve into contemporary art forms. Contemporary Native American art and jewelry has also been embraced by the art community as a whole.