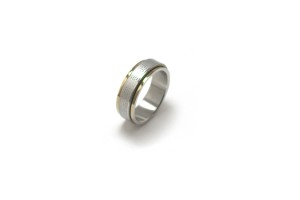 Native American Indian silver jewelry is often made with turquoise, known as hydrous copper aluminum phosphate. It is part of the religion of most native North American Indians. Turquoise is found close to the earth’s surface and that is how it was discovered for use with Native American Indian Silver Jewelry. It was mined in Santa Fe, New Mexico for over 2,000 years.

The tradition of using silver and turquoise began around 1850 with the Najavo tribe. Later, the Hopi and Zuni tribes, joined in. The jewelery was made just for tribe members to use and enjoy until the early 1900’s. Eventually they made jewelry to sell, which was different from what they made for themselves. They used thin silver and turquoise of less quality. This was the Native American silver jewelry made for the tourist trade.

More mines for turquoise were opened as the demand for the Native American Indian silver jewelry increased. With more material and better tools, they were able to supply the tourist trade and traders with quality jewelry. Early works in the 1870’s are plain silver with simple designs. Many designs are taken from horse gear and male dress ornamentation. Later, Native American Indian Silver Jewelry had more clusters of turquoise stones.

Silver Jewelry was also made by the Hopi tribe located in northern Arizona. Most of their jewelry is done in overlay style. Early silversmiths used primitive tools made of scraps of iron and steel. Often silver coins were melted to get silver for their jewelry. The silver was then shaped into a simple form and pounded into a thin sheet. Then cut and pounded into shape for the jewelry.